“When I talk to members about the importance of mental health, I always remind them to take care of themselves and to look out for one another. Walking 500kms over three weeks is my commitment to the issue. It will be tough but it needs to be, so people will pay attention and we can have a positive impact on the mental health of our members and their families.”

Graham Ashton has been a police officer for 37 years and was regarded one of Australia’s most experienced counter-terrorism police officers before being appointed as the 22nd Chief Commissioner of Victoria Police in July 2015. Prior to joining Victoria Police in December 2009, he served with the Australian Federal Police (AFP) for 24 years where he attained the rank of Assistant Commissioner.

In October 2002, Graham led the Australian Law Enforcement response to the Bali bombings, one of the largest police investigations Australia has conducted, for which his efforts were recognised by being awarded an Order of Australia in October 2003. On leaving the AFP, Graham joined the Victorian Office of Police Integrity (now the Independent Broad-based Anti-corruption Commission), where he eventually served as Deputy Director.

“Supporting our staff should not stop when they leave Victoria Police, and I am acutely aware that more needs to be done to support police veterans who are suffering mental health issues tied to their experiences in the job”

“Unless you’ve experienced it yourself, you simply can’t walk a mile in the shoes of a police officer suffering from a mental health condition as a result of what they’ve seen and felt in the job. Together though, we will walk more than 900 kms in our own shoes to raise awareness and money for those affected, to try to make their path ahead a healthier one.” 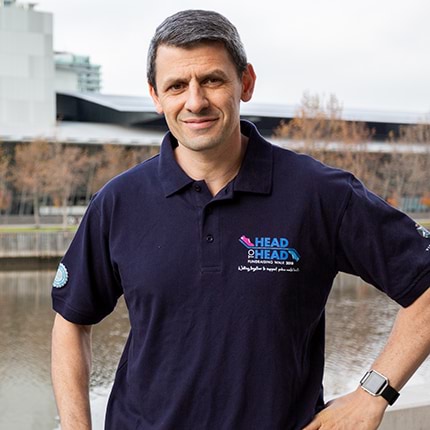 Having spent half his life as a serving police officer, most recently at the rank of Sergeant, Wayne has worked at various metropolitan and country police stations and he has also served in Investigation Taskforces, the Dog Squad, and Mounted Branch. Wayne worked as Police Negotiator for several years attending critical incidents the likes of which police attend each day across Victoria. These days, he leads an organisation that exists to protect, represent and support Victoria’s 16,000 serving Victoria police officers and protective services officers. Sadly, this includes members many who need support or have suffered mental health injuries in the service of their community.

“It is hard to imagine, that there are people out there in our community that have given their entire working lives serving the community, and because of that service can no longer fully enjoy their time in retirement because of a mental health condition. It is up to us to make sure that support networks can exist for veteran police and PSO’s to ensure that they can get support in equally in retirement and in service.”